The Hannibal Board of Public Works participates in several offered programs by the American Public Power Association.  The association advocates and advises on electricity policy, technology, trends, training, and operations for more than 2,000 public power utilities throughout the nation.

This HBPW RP3 team of employees was led by Jared Stewart, Electric Line Superintendent, and Courtney Harris, Administrative Assistant.  Courtney was directly responsible for collecting all the data and submitting it to APPA for judging.

An 18-member panel of national public power experts scored our application and awarded the RP3 designation based on the extent to which we met program criteria.  There are three levels of recognition a utility can earn (Gold, Platinum, Diamond), and this year, for the first time since we began participating in this program, the Hannibal Board of Public Works has earned the highest level of recognition a utility can earn – Diamond Level. 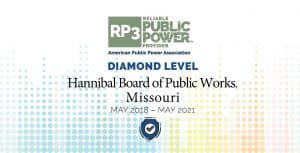 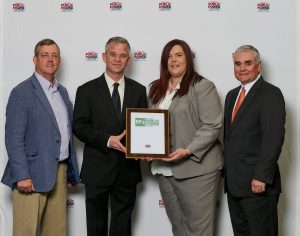 © 2022 Hannibal Board of Public Works